CYBEROO’s four watchtowers encircle your business and stand guard over your information.
From our stronghold, we put your business at the center of our Mission: To simplify your complexity. 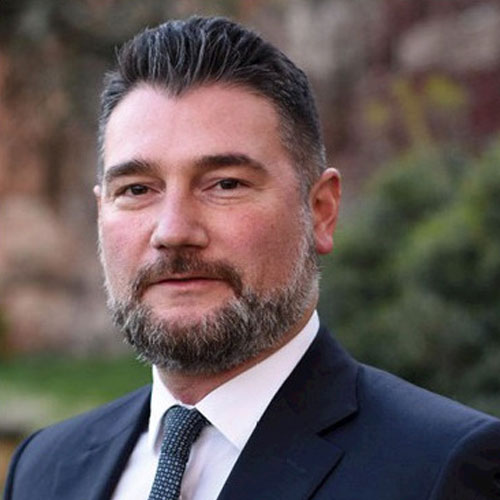 CYBEROO is a young and innovative company. Our goal is to anticipate the future and we do it through an approach centered around people and their individual qualities and contribution, to overcome every challenge. We believe that passion and determination are must-haves to create something unique. And we support a multidisciplinary approach and diversity. Because for us, differences are strengths, a value toward the achievement of one shared goal.

Reach out to us
Riccardo Pietro Leonardi
Riccardo Pietro Leonardi was born in Correggio (RE), on November 8, 1991. Riccardo Pietro Leonardi graduated in Economics and International Marketing at the University of Modena and Reggio Emilia and completed his studies at Bocconi University with a master’s degree in International Management, while achieving several international experiences in Singapore, Bruxelles, Tokyo and London.
As his first job after obtaining the Master’s Degree He played the role of Project Manager in the IT field for national and international projects for Deloitte Consulting Srl, from 2016 to 2019 and gaining in these contexts an excellent knowledge of business processes.
Since 2019 he has joined CYBEROO first as Key Account Manager, then with increasing responsibilities in Partnership, Business Development and Service Improvement.

Gianluca Settepani was born in Ravenna on January 25, 1970. He graduated in Economics and Commerce at the University of Bologna. He is a Chartered Accountant registered with the Order of Bologna since 1995 and with the Register of Auditors since 1999. In 1999 he began his collaboration with Studio Gnudi Professional Association and has been a member since 2007. He mainly deals with corporate, accounting and tax consultancy, extraordinary transactions (mergers, demergers, contributions), debt restructuring plans and assistance in the preparation of ITA GAP and IAS financial statements.
He was a member of the teaching staff at the University of Bologna of the advanced training course “Institutional and economic relations ITA-USA”. He is a member of the management committee of the Master in Administration, Finance and Control at Alma Graduate School in Bologna and was a member of the Direct Taxes Commission of the Order of Chartered Accountants of Bologna. He was President of the Research Commission “Innovazione delle Imprese – industria 4.0”, at the Order of Chartered Accountants of Bologna.
He is honorary representative of the American Chamber of Commerce in Italy for Emilia-Romagna. He is president of the study commission at the Order of Chartered Accountants of Bologna, “Industry 4.0”.
He collaborates for the newspapers: Il Sole 24 Ore, Milano Finanza and Italia Oggi and publishes articles for the magazines Giustizia Tributaria, Giurisprudenza Tributaria, Bollettino Tributario, la Rivista delle Operazioni Straordinarie, Crisi e Risanamento, Iposa and Giuffrè.

Veronica Leonardi
Veronica Leonardi was born in Correggio, on July 23, 1989. Veronica Leonardi graduated in Management Engineering at the Politecnico di Milano and completed her studies with a MSc in Marketing and Communication at SDA Bocconi. She has carried out several important brand management and trade marketing projects for several companies such as L’Oreal, Pirelli and Magneti Marelli, which have allowed her to strengthen her knowledge in the world of marketing. In 2014 she held the role of Web Marketing Consultant in LYB and in 2016 she joined Henkel div. Beauty Care as Marketing Specialist, where she took care of the Launch Plans of the division’s main products. She joined Cyberoo in 2018 as CMO.
Fabio Leonardi
Fabio Leonardi was born in Modena on November 7, 1962. Fabio Leonardi began his entrepreneurial career in 1991 becoming a shareholder of SEDOC and a member of its board of directors. He made a decisive contribution to the company’s growth both organically and through M&As. Fabio Leonardi held the role of Sales Director, General Manager and Managing Director of SEDOC Digital Group. In 2011 he was one of the main promoters of the SEDOC’s MBO operation, which allowed the acquisition of the Group from the MBFG curatorship. Subsequently, he carried out a series of important and virtuous extraordinary operations that allowed the Group to develop its core business activities. Today he is Chairman of SEDOC Digital Group and its subsidiaries.
Massimo Bonifati
Massimo Bonifati was born on January 30, 1967 in Brescia. Massimo Bonifati graduated in business economics at the University of Verona and completed his managerial training at SDA Bocconi in Milan. After an experience as an administrative manager in the ceramic sector, he worked for 10 years as Project Manager for Finance Information Systems and became the director of For Consulting Srl, providing consulting services to major companies operating in Italy and abroad. In 2005 he started working with SEDOC and today he is CEO and CFO of the SEDOC Group. He was directly involved in the MBO operation and he coordinated the technical and administrative aspects of all the extraordinary operations carried out by the Group.

Claudia Peri was born in Bologna on February 7, 1977 and graduated in Economics and Commerce. She is a chartered accountant registered with the Bologna Bar since 2006 and with the Register of Statutory Auditors since 2007. From 2002 to 2005 she worked in the auditing branch at a leading international auditing firm. He attended the master in tax law of the Business School of “Il sole 24 Ore” and in 2005 he began a collaboration with Studio Gnudi. He mainly deals with corporate, accounting and tax consultancy, extraordinary transactions (mergers, demergers, contributions) and assistance in the preparation of financial statements.

Mariangela Rossetti was born in Bologna on March 20, 1971. She graduated in Economics and Commerce from the University of Bologna in 1997. She is licensed to practice as a chartered accountant at the University of Bologna in 2003 and is enrolled in the Register of Chartered Accountants and Accounting Experts of Bologna in the same year. She is registered in the Register of Statutory Auditors established at the Ministry of Justice in 2005. Since May 1997 she has collaborated with Studio Gnudi in Bologna, first as an accountant and then as a freelancer.

Mara Lugli was born in Formigine on July 13, 1953.
After completing his studies, he worked at a Modena company until 1986, gaining excellent experience up to the position of administrative manager.
From 1989 to 1994 he worked at a Modena Accounting Firm, where he gained experience in various sectors.
She is registered in the Register of Chartered Accountants and Accounting Experts of Modena since 1996 under no. 560 / A and in the Register of Statutory Auditors from 1999 to no. 76067.
He carries out his professional activity on a personal basis for various joint-stock companies and partnerships, sole proprietorships and professionals, gaining experience of various kinds, in the various fields of accounting, tax and tax consultancy, accounting consultancy, tax returns, corporate transactions various kinds, preparation of tax returns, auditing, assistance in tax disputes, appraisals, chamber and administrative services for craft, commercial and industrial companies.

Alessandro Viotto was born in Udine on 19 September 1981.

He has been enrolled in the Rome Bar since March 2013. Founder of the Viotto Law Firm based in Udine and Rome. He has assisted companies and investment funds (SGR) in the ordinary legal consultancy activity. In the commercial law sector he has dealt with extraordinary transactions, M&A (in particular leverage buy out), restructuring procedures, composition agreements, insolvency procedures, the organization of business models, models for Law 231 and the drafting of shareholder agreements. Until September 2018 he held the position of independent director in various Boards of Directors. He has personally followed many tenders, some also for the construction of complex infrastructures (ports and airports) and has played the role of advisor in finance projects pursuant to art. 183 of the procurement code. In the 2015-2016 two-year period, on behalf of the SIREI platform, he carried out consultancy activities for the implementation of two infrastructure urbanization operations, interacting directly with the governments of Cameroon and Morocco. Author of economics writings for the Bruno Leoni Institute in Milan.

Graduated as an Accountant in 1972, in 1990 he was appointed Official Auditor and subsequently registered in the Register of Statutory Auditors held by the MEF.
Since 2003 he has been enrolled in the Order of 118 Labor Consultants of Reggio Emilia.

From 1980 to 1983 he was a member of the Board of Directors of a commercial company licensee of a famous brand of a German multinational.
Since 1983 he has been practicing freelance in an Associated Firm that deals with tax, legal and labor consultancy (Bartoli & Arveda Professional Association) in Reggio Emilia.

He has held and holds administration and control roles in various companies both nationally and part of international groups.

Marco Orlandi was born in Castelnovo Né Monti on April 26, 1975.

Having acquired the technical diploma, he gained over twenty years of experience as a computer technician within the Sedoc group, covering over the years a growing role of coordination and team leader thanks to his knowledge and technical skills. As of the Admission Document Date, he holds the position of IT Operations Manager at CYBEROO.

Davide Cignatta was born in Castel San Giovanni (PC) on 11 May 1980. Following his training in the IT sector, he builds his background in the service area where he acquires specific skills by designing and implementing network infrastructures. In 2001 he began his entrepreneurial career and entered the capital of Oversystem Computer Service where he held the position of Director and Sales Director. In 2005 with the acquisition of Oversystem by Sedoc Digital Group S.r.l. and with the subsequent integration with Gamma Servizi he gradually took on increasingly important tasks until he became Sales Director of Sedoc Digital Group S.r.l. As of the Admission Document Date, he is a shareholder and director of Sedoc Digital Group S.r.l., as well as Brand Ambassador of the related group.